Sometimes it is pleasant to make little things, items that take a day and are completed.
A couple of sewing accessories fall into that category. 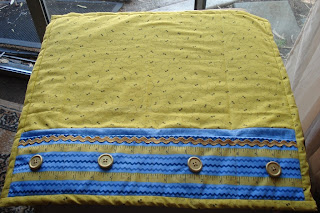 A sewing machine apron
and

an armchair caddy
Earlier this month I constructed a Calico Angel to send to family as part of their Christmas decorations, and this morning as I was trying to sort out what was what do you think I could find that Calico Angel?  No!  I decided to make another.

Then, later, a sudden thought entered my [previously empty] mind.  Where else would one store a Christmas decoration if not with other Christmas decorations.  Yes, it was there ... now there are two Calico Angels to be posted away.
Posted by Shirlwin at 4:19 PM 2 comments:

During 2012 I have been working on Jenny of Elefantz  BOM, "Promises and Borders".   This morning I completed this delightful quilt, and am proud to say all the stitching, sewing together, quilting [not perfect, but I am improving] and binding. 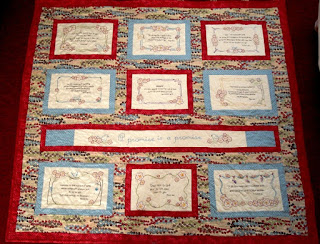 The Promises and Borders quilt is now ready for posting to New Zealand.
Posted by Shirlwin at 9:51 AM 8 comments:

Email ThisBlogThis!Share to TwitterShare to FacebookShare to Pinterest
Labels: Promises and Borders

I notice on my forays around Blogland some folks have exactly how many days to Christmas ... one down to the second countdown!
Eldest son, his partner, and his daughter are off to my old home town for the holidays and will spend Christmas with two of his brothers, and youngest son's partner and their little son.  I have chosen to stay on this side of the Tasman ... until later ... albeit we will be looking after their dog and house.
However there is a way I can make my presence felt amongst the Christmas cheer, and that is a few decorations to remind them of 'Mother'. 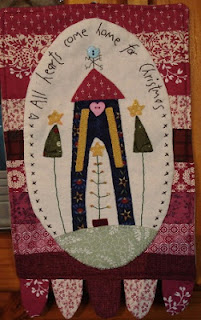 The above adaptation of an Anni Downs design, All Hearts come home for Christmas, should help them to remember Christmasses past when the family gathered at home.
Posted by Shirlwin at 3:50 PM 1 comment:

In the DTE Forum a inquiry for a shower pouf pattern was requested.  Not crochet, but in knitting.
I searched the Internet for a pattern [plenty of crochet ones, few in knitting], adding a link.  But in my usual hurried manner I neglected to read to the end of the pattern where some had replied that it was difficult to make up.  This fact was pointed out.  I needed to know if the pattern was actually viable, so hunted out the end yarn of several dishcloths, and last night, casted on.
The pattern was frustrating ... too many stitches increased making it extremely difficult to actually knit a row.  However I perservered, and resorted to using a round needle for a few rows, which made the task easier.
Reading to the end of the pattern I wondered how to make it up ... but with the knitting complete there only remained the task of making it up.
I looked on the Internet ... no luck.I re-read the pattern [if in doubt read the pattern!], threaded a needle and began following the instructions. 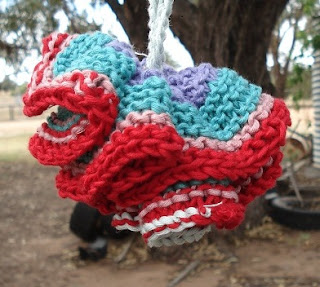 The completed body washer may not be elegant, but the pattern did work out ... my joining in of new colours was without any rhyme or reason, just the fact that I had finished one ball and needed another colour being the only condition.
Posted by Shirlwin at 4:31 PM 3 comments: 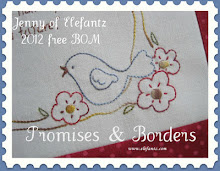